The series was created and developed by Michael Jeans with the original cast and writer, Susan Pleat, at the request of the Independent Broadcasting Authority (IBA), as one of four UK produced programmes inspired by the relatively new American programme Sesame Street.
​
ITV produced four programmes simultaneously with Pipkins (ATV) transmitting at the start of January 1973. The other programmes were Hickory House (Granada Television) and Mister Trimble (Yorkshire Television) and Rainbow (Thames TV).

The series was a first. Mini dramas with a gentle educational slant for the under 5's had never been tried before, nor, I think, since. This has almost certainly created it's longevity in the minds of it's target audience.

It was originally called Inigo Pipkin named after the chief character, who was played by George Woodbridge. He was a large jolly grandfather who unfortunately died during the recording of the second series. So Wayne Laryea (who played Johnny, his assistant) took over and the programme was renamed Pipkins.

The scenario was very simple - there was a group of animals and one human who lived together and ran an organisation called "The Help People". They performed useful tasks, that were seldom advertised in Yellow Pages, such as rescuing model aeroplanes from trees!

​Every member of the household had a job:

Hartley Hare (played by Nigel Plaskitt) was the Managing Director - or at least he had an office with a portrait of himself and a telephone. He was convinced that he was in charge although funnily the others never realized this... Hartley managed to incorporate into his personality the worst human frailties which all of us possess in varying degrees, which meant that viewers could easily identify with him. He had to be the centre of attention, and if he wasn't, he would not be beyond creating some diversion to swing the attention back to him. He also cheated and sulked when found out. Often he would not be the least bit interested in some object until someone else wanted it. Then he would go to enormous and devious lengths to get it for himself. Yet at the same time there was always something charmingly naive and open about him. He would be genuinely horrified if it was pointed out to him that his actions had been selfish and hurt someone else. He would even go out of his way to make it up to them. He was also extremely highly strung so that even the simplest decision or action would become a dramatic highlight! 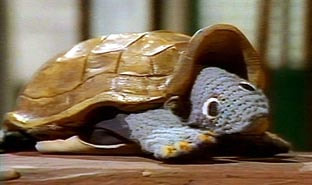 ​Tortoise (played by Nigel Plaskitt) lived on a cash register and acted as treasurer, but as he was the ultimate cautious pessimist he wouldn't allow anyone to spend any money, as they might never have any more... Tortoise was almost entirely without humour. He spoke very slowly and was boring, so that by the time he had finished everyone had gone off. He was very tight with money, largely because his pessimistic view of life told him that each penny they earned could be their last. He was also very accident-prone. If there was an open manhole, he'd go down it. 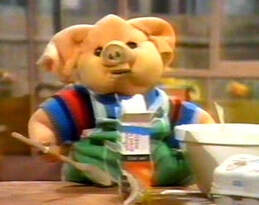 Pig (played by Heather Tobias, Lorain Betorelli, Anne Rutter and Alex Knight) was the inventor who created amazing machines - mostly connected with food (how to inject chocolate into a cheese sandwich, for example)... Pig had the most brilliant scientific brain - which seemed odd coming from someone who spoke with such a broad Birmingham accent. He had an enormous appetite, and it was this which led to his experiments to convert everyday objects into food. Like all great inventors, he often got carried away and would go past his original objective as more and more interesting challenges emerged. 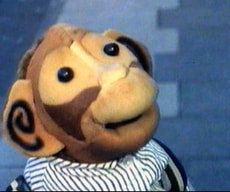 Topov (played by Heather Tobias, Lorain Bertorelli and Elizabeth Lindsay) was the monkey because he was always on top of something... 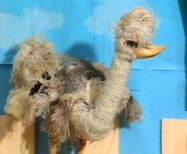 Octavia (played by Heather Tobias, Lorain Bertorelli and Elizabeth Lindsay) was a French ostrich who just had to look beautiful and sing opera...
​ 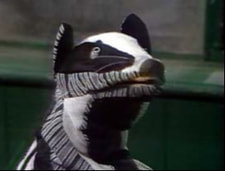 Moony the Badger (played by Nigel Plaskitt) was an occasional character who visited Pipkins. Introduced around 1976 he was an Irish storyteller and carried all his worldly possessions in a red hanky on the end of a stick.
The series was produced at Elstree, Herts., in the ATV studios which are now owned by BBC TV and home to productions such as EastEnders and Holby City.
In the mid 1970’s Jim Henson moved into the next door stage to shoot The Muppet Show.

Originally the Pipkins set was built at ground level as any normal TV set with a yard, a kitchen, workshop area, a puppet stage (which became Hartley's desk area after the death of Mr Pipkin) and the quiet area where they could sit for stories, etc. Tortoise also lived in a hole under the bench here. Eventually they moved to a large composite set constructed three feet off the ground, so that the puppets could move from room to room. This change of raising the set was inspired by The Muppet Show on the next stage.   Mike Jeans had seen the puppets moving round their set and realised that most of our cast, who were puppets, were static.
There was also a kitchen/living room with steps out to the back yard where Topov lived in a tree house, a serving hatch through to Hartley's office, and a dumb waiter lift going from the kitchen up to Hartley's bedroom and down to Pig's laboratory in the basement.

Hartley also travelled out from time to time, to places that included Billingsgate Fish Market, a public library, the University College School of Dentistry and the Royal Free Hospital. He also went on trains and was once seen at a tube station (Knightsbridge).

Hartley once went down The Mall, and having learnt that the flag flying on top of Buckingham Palace was to let him know that The Queen was in, he hoisted one back at Pipkins so that if she happened to be passing she would be able to see that he was at home and pop in for a cup of tea.

There were other characters that appeared for short periods:  Pigeon - played by Lorain Bertorelli, Mrs P the penguin - played by Diana Eden, The Doctor - played by Nigel Plaskitt, Sophie the Cat played by Anne Rutter and Rosie Hopkins played by Jane Tyson.

The programmes appealed to adults as well as children; they were written on two levels to encourage parents to watch with their children.   As a result it became something of a cult programme which was watched by all ages.

Before any puppets were designed, the characters were worked out. They were based on human weaknesses and strengths.  Knowing each one's personality, animals were found to fit them. For example, a temperamental hare rushes around in circles apparently achieving very little, so one of these seemed exactly right for Hartley.    Equally, a slow, humourless accountant just had to be a tortoise!

The programmes were shown continuously from 1973 to 1981, and in total 313 shows were made though there were many more transmissions as a selection of each years episodes were repeated during the summer months.   When ATV lost it's license to transmit, Pipkins, probably due to financial considerations of Central TV, was not re-commissioned.